Korean Village Restaurant keeps popping on the screen whenever I search for the best restaurants in Malate, Manila. After several attempts, CS and I finally went out one dinner time to check if the reviews were indeed true. One thing I hate about going to Malate is finding a parking spot since most of the restaurants don't really have designated spaces and just let their customers park along the streets. We were lucky to arrive early and got the last spot in front of Korean Village.

CS and I got inside and were ushered to a table in the non-smoking area. First thing I noticed is the run down interior and the smell of old grease -- not a good first impression. We actually thought of leaving and just go to our favorite Asunaro Restaurant in Pan Pacific Hotel but I was really hoping to try it even once so we went ahead with ordering anyway. Based on the reviews I've read prior to our visit, Korean Village offers one of the best meats for grilling in the area. Since we were just ordering for 2 that night, we decided to order a beef, a pork and a fish dish for variety.

The restaurant offers 4 types of Banchan that are not refillable, another first in our book since all Korean places we've been to in the past offered complimentary refill of the side dishes. Except for the Spicy Dilis, all others were bland and forgettable so we didn't bother requesting anymore.


Korean Village Restaurant lives up to the hype with its delicious, tender and semi-sweet beef and pork meats. No wonder a lot of  people, mostly patrons I guess, still go here even if a lot of newer restaurants have opened nearby. Contrary to other reviews though, the servings were not as huge as I was expecting. I've been served bigger slices of meat at the same price from restaurants like Makchang and A-Won, two of our favorite Korean places in Manila. 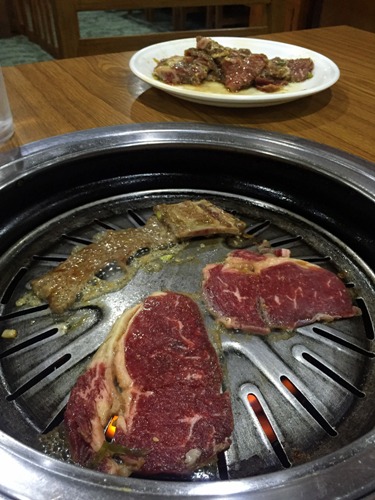 Hunger and curiosity were satisfied but I guess I won't be coming back anytime soon. Aside from the old and smelly interiors, I find the staff unfriendly and the service really slow even if only a few tables were occupied that night. Another affirmation that to each his own indeed.