Where to eat waffles at 12 midnight?


We went to 3 Starbucks before we found one that's still open and has available waffles to satisfy my cravings. It was literally drenched in rich whipped cream and strawberry sauce but I still ate it anyway. The following day, the desire to eat waffles became even stronger so I went ahead and googled a place that serves breakfast all day. The list came back so I asked CS if we can have lunch at Pi Breakfast and Pies at Malingap, just a corner away from the famous Maginhawa Street.

CS and I were greeted by Pi's friendly staff upon entering the place. They only have about 5 tables in the air-conditioned area so better reserve a table before you go. More tables are located at the back but with summer approaching, it would be best if you book a table indoors.

The thing is we've always been adventurous when it comes to food (or beverage) but I guess we have our limits too. The combination was so bad that even CS who has more tolerance to unique and peculiar tastes and will try to finish our orders so it won't go to waste only had a couple of sips off his Cranberry Celery Cooler. My glassful of Lemon Basil Fritz was more bearable but still an acquired taste. Just stick to iced tea or fresh orange juice for a safer choice. 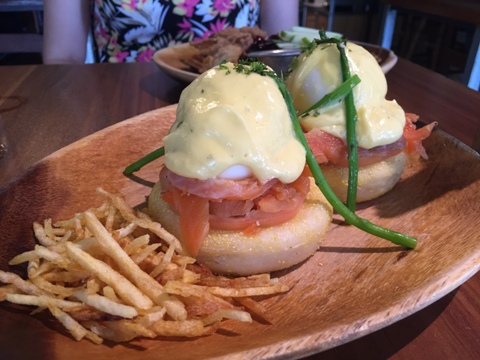 CS settled for the Eggs Sammy, English muffins topped with tomato, salmon gravlax, five-minute eggs, dill hollandaise and asparagus with spiced shoestring potatoes on the side. It was okay but could use some more sauce to maximize the play in flavors. 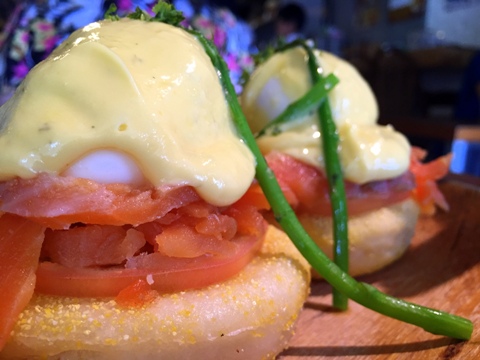 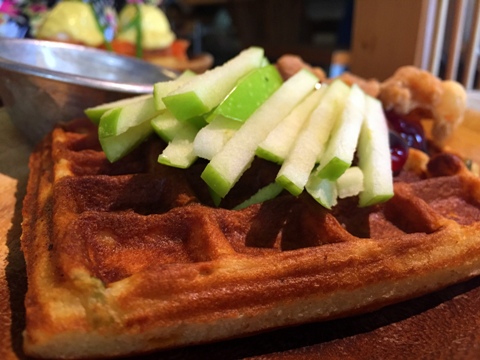 Finally, some freshly-made waffles to start my day! I love that Pi's waffles were cooked just right with its crunchy sides but still soft inwards with just enough blueberry sauce. The presentation was too pretty to eat so I made sure to cut evenly so as not to dismantle its appearance and prettiness. Only downside was that the chicken it came with only had the skin and no meat at all. To avoid misleading and deceit, the dish should be named Waffles and Chicken Skin. 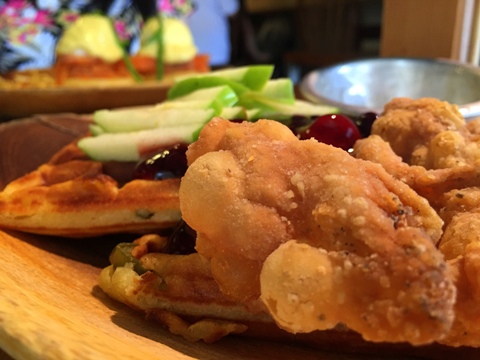