I've been meaning to pay Tous les Jours a visit ever since I read that there's now a franchise in the country but SM North Edsa is way too far for me. I love breads and seeing how pretty the cakes were, I was really excited when I heard that they're opening a branch down South too. So imagine how wide my eyes have been when I saw that their store at the Mall of Asia is already open!

Right after my friend's birthday dinner at Uno Pizzeria, we passed by Tous les Jours before going home. I felt like Alice in Wonderland (or should I say Bread Wonderland) upon stepping foot to my newest favorite bread store in MOA. First thing I noticed was how organized the shelves were! The place was really clean and smells so good!

After making two rounds (I was undecided which one's to get) and asking the very accommodating staff about the breads, I came home with a bag full of these treats!

The staff insisted I try the Sweet Black Rice Bread with Cream Cheese, one of their bestsellers, as she herself can't stop raving how yummy this is. So I bought two -- one for me and the other one for my dad who is also a bread lover. After one bite, I instantly knew that this is the one! The bread is really soft and delicious and the cream cheese was of top quality. Compared to others that I've tried, Tous les Jours' doesn't scrimp on ingredients so you won't feel bitin with the generous serving of cream cheese inside.

My mom loves Baguette and I bought her one so she can try TLJ's version. She told me that it was also good and better from the ones I buy from two of the more popular bread shops.

I got the 5-pack French Macarons at just Php28.00 per piece! I was craving for sweets that night so the colorful Macarons instantly got my attention. They got all the flavors then including Vanilla, Strawberry, Chocolate, Green Tea and Mango that I was able to try them all. The outside is a bit crunchy but the insides is so soft and chewy! I especially liked the Vanilla and Green Tea flavors but I'd take home any of the flavors anytime of the day. 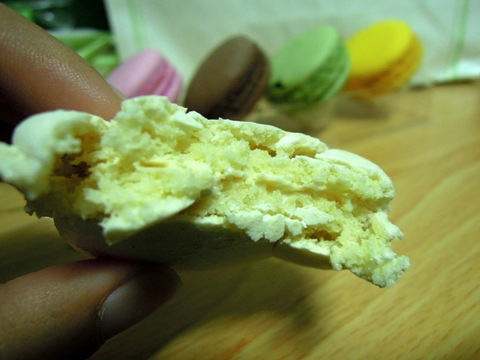 I am so addicted to their breads that I've been visiting TLJ at least twice a week ever since!

Pasay City, Metro Manila, Philippines
Posted by Dek at 10:32 AM