My boss went to Tokyo, Japan two weeks ago and he brought us this pasalubong. Tokyo Sky Tree (東京スカイツリー Tōkyō Sukaitsurī) is a broadcasting, restaurant and observation tower in Sumida, Tokyo, Japan. It became the tallest structure in Japan in 2010 and reached its full height of 634.0 meters (2,080 ft) in March 2011, making it the tallest tower in the world, displacing the Canton Tower, and the second tallest structure in the world after Burj Khalifa (829.8 m/2,722 ft). - Source


I initially thought it was some sort of a frame souvenir from Tokyo Sky Tree until I opened the box and saw these great-looking treats! 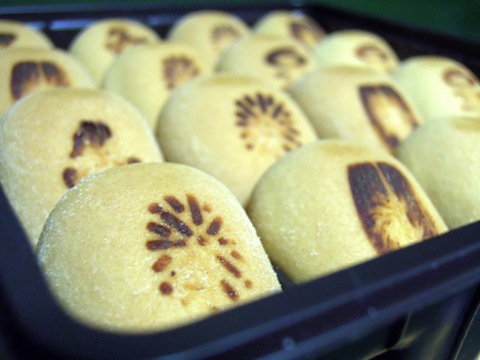 What's more surprising is that the filling was Sweet Potato! I tried to preserve it as long as I can but it only lasted a couple of days because it haunted me down even in my sleep and every time I wake up, it was the first thing I crave for. I love how Japanese ingenuity is so evident in everything they do, even with this wonderful goodies!
Posted by Dek at 9:43 AM