Watching Kris TV is one of my guilty pleasures. One of their episodes featured Yakiniku Sakura as one of Kris' favorite Japanese restaurant in Manila. And when the words delicious, best and Japanese food are used in one sentence, I'm so there!

On our way to Sakura, I was already telling DB not to expect to see a modern Yakiniku restaurant like the ones we frequent. As what Kris mentioned in her show, Sakura is quite old and the interior is very outdated. 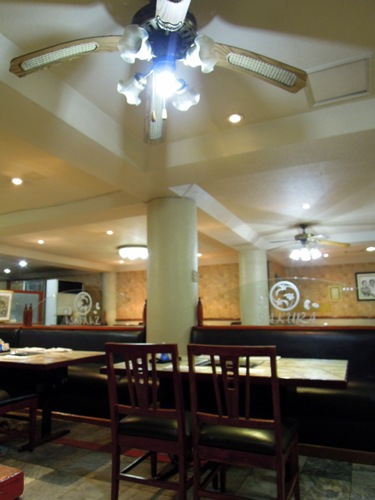 What they lack on the looks part, Sakura definitely made up for the quality of food that they serve! 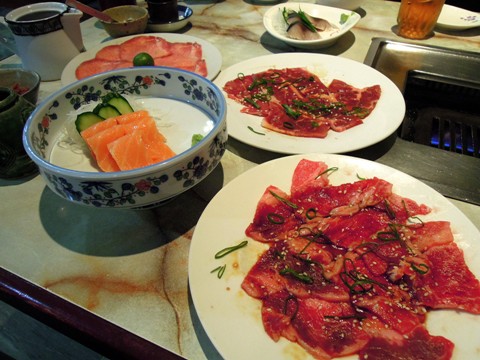 The waitress cheerfully placed the sauces on the table. This is one of my favorite things to do while waiting for the food -- mixing and matching different sauces. Some are successful and really good while others are, well unpalatable. My apologies to the restaurants for leaving weird-looking mixtures on the table. As the saying goes, success needs failure. *wink*

I asked the waitress for her recommendation and according to her, the Prime Ribs are what makes people come back to Sakura. A few minutes on the grill and I'm in for a perfect treat! Melt-in-your-mouth beef and very flavorful too!

I was kinda hesitant to try this at first but after thorough convincing, I gave in! The tongue tasted just like any other meat and with a delicious sauce to dip into, all my qualms fade away and before I knew it, I was asking for more!

We also ordered a plate of Short Ribs to share. For a cheaper alternative (compared to the Prime Rib) this one's not bad either. Both made me eat more rice than I wanted to.

Kris was right! Sakura really is one of the best Yakiniku places in Manila. Top-grade meats and fresh Sashimi, no wonder it still stands strong in a very competitive location.