Old and New at A-Won

Its nice to try something new, but there are times when you just want to go back to where you had the perfect time and the most amazing meal.

That is what A-Won is to us. The best Korean restaurant we've tried so far.

Service is impeccable as usual. Though there are dishes on the menu that the waitresses had to ask the owner/manager about, but with its extensive offerings and almost-the-same names, its almost understandable they don't know everything that we ask them.

We started off with the wide array of appetizers then ordered some new and old dishes we've tried in the past.

The sushi and sashimi were not the freshest especially the Tuna in the Temaki but we like raw fish so much that we couldn't care less.


Same goes for the Yukhoe. My previous visits left me speechless but this time was quite disappointing.

We went back a few days after but was too hungry to take pictures of the food and was only able to take a photo of the aftermath. 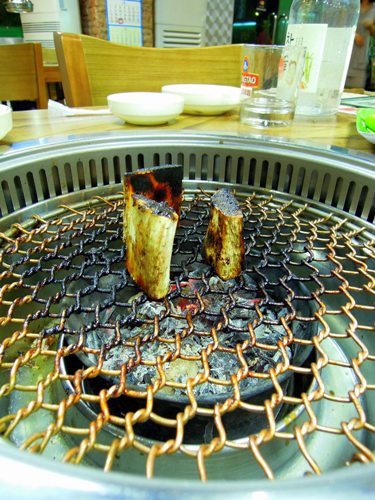 What was left of the two orders of Marinated Short Ribs perfectly grilled for two hungry carnivores.