The Magnum craze had been going on for weeks now and there's no stopping it, well at least not in the near future, thanks to the social media networks that consistently spreads the word of the newest and most sosyal ice cream available today.

Proudly Filipino made and concocted, Sebastian's has been around for years now but hasn't reached the "household name" status yet (even some of my friends haven't heard of it) maybe because it only has a few branches all over the Metro. I first came across the brand a few years back when I went to Podium and that is where I had a love at first bite!

So while everyone was going nuts over Magnum, I found myself standing in front of the new and most favored flavors of Sebastian's for minutes trying to decide which one to get now and which ones to try for next time.

I tried new flavors this time around and veered off from my usual Chocolate Chip Cookie Dough and Chocoholics Anonymous. After trying at least 4 flavors (you can ask for a free taste), I ended up taking a cup of Cornflake Milk ice cream. 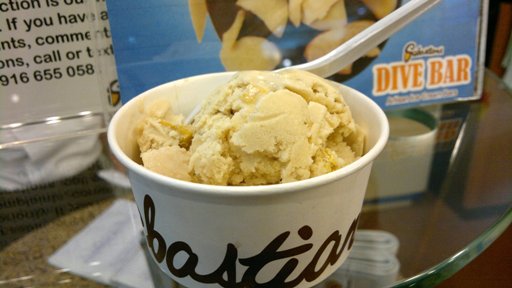 Feels like I'm eating left over cornflakes with milk that spent an overnight in the freezer, but so much better!


In celebration of the summer in the Philippines, I am glad to share that Sebastian's has new flavors catered to the Filipino palate like Biko, Puto Bumbong, Tibok-Tibok (a Classic Pampanga dessert), Champorado, Banana-Q, Ginataang Halo-Halo, Sapin-Sapin and Mangga't Suman.

Made with real sticky rice and coconut cream to produce that distinct suman flavor twirling with the ripest and sweetest mango which can only be found in the country.


Kuchinta, Ube Halaya, Gata and Langka flavors all in one scoop! It's amazing how Sebastian's was able to make this famous Pinoy kakanin into an ice cream complete with all the flavors, even the texture is almost the same!


Once in a Blue Moon (Blue Cheese Ice Cream) -- I will be back for you!

Pasay City, Metro Manila
Philippines
Posted by Dek at 9:31 AM